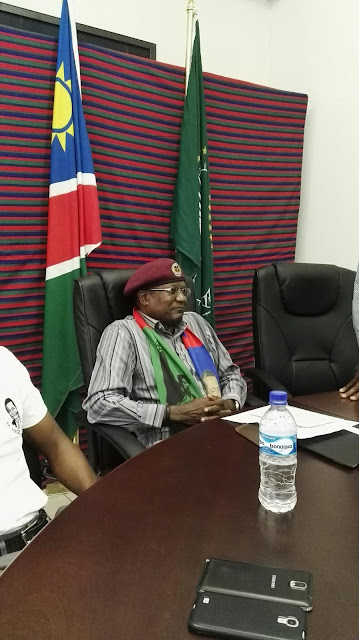 SPYL in the Hage era.

SPYL in the Hage era, is the tittle for this piece and deliberately so. It is not only  provocative and stimululating but invokes a need for analysis.

Provocative not only because of the perception that our new President along with the SWAPO leadership is anti youth but also because of the ongoing so called " SWAPO 4 "saga.

Analysis is required because SPYL must and does continue to exist in form and character, despite the fact that two of the movements senior leaders have been expelled and are involved in a court batte against the party over their expulsions. That some have deemed this to be without just cause and anti democratic, is a subject of much debate. I will not delve into my views of this debate, as the matter is being adjudicated in court.

The matter, however, that I will deal with, is how do we juxtapose our relationships within the SPYL in the back drop of an ostensibly anti progressive and anti youth party?

I have said elsewhere that SPYL continues to exist in form and character. Simply put, this means that interms of the  constiutional provisions of the SWAPO PARTY and its YOUTH LEAGUE. The expulsion of the former Secretary of the youth should not be interpreted either by the leadership of the party or the membership of the youth league as a suspension of The Organ. In the same vein the said expulsion of Dr Ngurare should not imply that the values, motives, political and developmental aspiration of the SPYL have been lost.

The organ which is the SPYL continues to exist legally and organically because the developmental, generational and political imperatives that necessitated its establishment continue to exist, even and despite of the ongoing debacle.

The consitution, policies and
resolutions of SPYL continue to be living instruments that must inspire our activism and aspirations as a generation. They do not belong to individuals but to the collective, some of which both predate us, and may very well outlive us

The objectives of genuine economic, empowerment, rural development, peri urban development, free education, quality healthcare, non racialism, the pusuit of a classless and equal society and the like, continue to be relevant. SPYL does not cease to exist nor does cease  to be a relevant interloctor to pursue them. The contrary would suggest that those who think otherwise were not rooted in why they became SPYL members in the first instance.

SPYL continues to live and must live as the balance of forces both within SWAPO and the broader namibian society require an energised and mobalised youth cohort to pursue not only our generational goals but those of a inherently  progresive society.

Historically the woman , proletariat, workers and youth of SWAPO have been the motive force that have contributed in aliance with one another, to the liberation and eventual transformation of our society. Nation building and transformation remain uncompleted task that every swapo member is obligated to pursue, irrespective of who has come and gone in the party. In the late 1990, the then secretary o SPYL Ignacious "Iggy" Shixwameni resigned from the SWAPO party and as a government minister ostensibly due to the fact that he found his personall and political ideals to be irreconcilable with those projected by the party and it's goverment. Despite his popularity SPYL grew from strength to strength, into the political behemoth it is today.  The reason for this was simply  that Shixwamnei was not the emodiment of SPYL. SPYL and SWAPO predated him and it will certainly outlive him.

I would also like to devote some time in adressing the notion that the SWAPO leadership is anti youth.

Many beleif so and say so every chance they get. What some youth call a anti youth leadership and what some elsders call a lost youth is simply the manifestation of a party that has failed to negotiate the perils of what is known as the generational gap.

Which risk continues to confront us and must be dealt with at the highest of policy levels. Branches of the generational gap debate include succesion and grooming strategies within the mother body of younger leaders, the absence of genuine and constructive  platforms for interactions on inner party life and discord between party policy and state level implementation of policy.

That the youth feel uninvolved and unappreciated in debates of this nature is a perception that must be managed and not simply ignored. It is no understatement to say that the continued mismanagement of the generatiomal gap by both the youth and the leadership, poses a  existentential threat to the party and its youth.

The African Union for example in recognizing the growing alientaion of the youth have created the a
African Youth Forum and organizes in partnership with UNECA a intergenrational dialogue between youth and Heads of State and Goverment every year. Similarly, the UN is reknowned for creating platforms where young, emerging and older leaders, discus the most pertinent challenges of our time.

Therefor, the symptoms emerging in our society, isnt proof that the leadership is anti youth or that young people are lost. Simply these symptoms are testimony of a society unable to mediate  generational perspectives.

Finally, in the near future, i wish to confront the question of how SPYL has historically positioned it self towards the Party. In other words, does the reaction of the youth league leadership to the Hage Presidency of the Party and State in the last few months compare to other stages of our history, are there parallels that can be drawn?  Till then, live and let live.

Posted by Mandela at 3:02 PM No comments:

Young people today perhaps more than any other generation before them are faced with multiple and complex issues, many of which seem remote and out of their terrain. Most frighteneing is the inabailty and/or unwillingness of the 21st Centaury youth to engage the world around them. This space is my attempt to define and engage the world from my postion as a young African cognisant of the huge ''burden'' african youth have to confront and deal with...

When will it all end, the poverty, pilliging , rape and suffering...

Have you read this one? La Rue de Cases Negres-By Joseph Zobel

The attainment of FREEDOM very often makes us oblivious to the lack of freedom and demcracy that our own people experienced not so long ago, just as the world stood by us during our dark times of oppression and subjugation, let us stand with the people of burma as they fight agianst poverty and for their fundamnetal human rights...